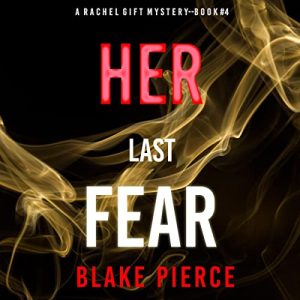 Young, healthy victims are turning up dead in the New Mexico desert, their bodies displayed in dramatic ways. Rachel must race against time to track down the killer—even if that means indulging in his twisted fantasies.

FBI Special Agent Rachel Gift is among the FBI’s most brilliant agents at hunting down serial killers. She plans on doing this forever—until she discovers she has months left to live. Determined to go down fighting, and to keep her diagnosis a secret, Rachel faces her own mortality while trying to save other’s lives. But how long can she go until she collapses under the weight of it all?

Her Last Fear (A Rachel Gift FBI Suspense Thriller) is book 4 in a long-anticipated new series by number one best seller and USA Today best-selling author Blake Pierce, whose best seller Once Gone (a free download) has received over 1,000 five star reviews.

FBI Agent Rachel Gift, 33, unparalleled for her ability to enter the minds of serial killers, is a rising star in the Behavioral Crimes Unit—until a routine doctor visit reveals she has but a few months left to live.

Not wishing to burden others with her pain, Rachel decides, agonizing as it is, not to tell anyone—not even her boss, her partner, her husband, or her seven-year-old daughter. She wants to go down fighting, and to take as many serial killers with her as she can.

When she learns of a string of bizarre murders in New Mexico, Rachel quickly realizes this is no ordinary killer. In a race against time, Rachel must quickly figure out who is luring these victims out to the desert—and why.

Meanwhile, her own clock is running out. Can she solve this macabre puzzle and stop the murderer once and for all?

A riveting and chilling crime thriller featuring a brilliant and flailing FBI agent, the Rachel Gift series is an unpausable mystery, packed with suspense, twists, and shocking secrets, propelled by a fast pace that will keep you bleary-eyed late into the night.