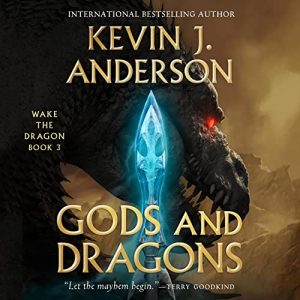 Co-author of the Dune sequels, Kevin J. Anderson’s Gods and Dragons marks his triumphant return to epic fantasy, featuring a politically charged adventure of swords, sorcery, vengeance, and the awakening of sleeping giants.

Two continents at war: the Three Kingdoms and Ishara have been in conflict for a thousand years. But when an outside threat arises – the reawakening of a powerful ancient race that wants to remake the world – the two warring nations must somehow set aside generations of hatred to form an alliance against a far more deadly enemy.

The Kingdom Of Gods