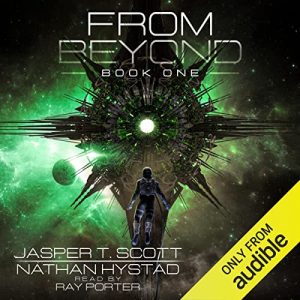 Are we alone? It was only a matter of time before the truth was revealed….

Commander David Bryce is scheduled to lead a routine re-supply run for the Orbital Development Group (ORB) to the fledgling colony on Mars. Without warning, he’s taken away by government agents and told the mission parameters have changed.

They’ve discovered something. And it’s drifting closer to Earth.

Atlas Donovan tirelessly hunts for an artifact, and tracks the piece to Lake Como, Italy. After the recent news from ORB, Atlas is more drawn to the trail than ever. He continues his search, determined to uncover the significance of the strange markings, and more importantly, where the artifacts hail from.

As both Atlas and David draw near to their objectives, they realize a secret organization is working against them; a clandestine force with so much influence, they seem impossible to oppose.

No, and they’ve been here before….

From Beyond is an action-packed science fiction thriller from the best-selling author duo Jasper T. Scott and Nathan Hystad.