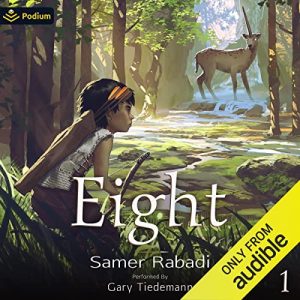 Life’s tough when you’re trapped in an eight-year-old body on another world.

His name is Eight. Not really, but that’s what the System decided after a slip of the tongue. One moment, he was stepping out the office door on the way home, and the next waking up on a hillside below a town wall. Oh, and the gate guard drove him off, because he thought Eight was a monster.

What’s a boy to do in a world full of magic and so many, many hungry creatures searching for their next meal? Well, there’s an old man inside that body, and he’ll use everything he’s learned in his sixty-four years to survive. Starting a fire? Sure. Crafting a spear? Check. Defending the cave he calls home? Also check, a big one.

There are allies too, but not the kind you’d expect.

Eight is a LitRPG novel of magical survival—of discovery, bushcraft, and creatures weird and wonderful. A hit on Royal Road–with millions of views–and now it’s available on Audible (narrated by the estimable Gary Tiedemann).