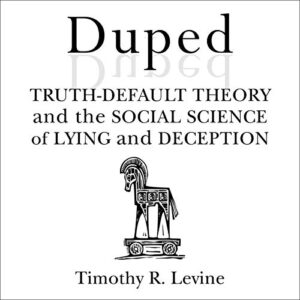 From the advent of fake news to climate-science denial and Bernie Madoff’s appeal to investors, people can be astonishingly gullible. Some people appear authentic and sincere even when the facts discredit them, and many people fall victim to conspiracy theories and economic scams that should be dismissed as obviously ludicrous. This happens because of a near-universal human tendency to operate within a mindset that can be characterized as a “truth-default”. We uncritically accept most of the messages we receive as “honest”. We all are perceptually blind to deception. We are hardwired to be duped. The question is, can anything be done to militate against our vulnerability to deception without further eroding the trust in people and social institutions that we so desperately need in civil society?

Timothy R. Levine’s Duped: Truth-Default Theory and the Social Science of Lying and Deception recounts a decades-long program of empirical research that culminates in a new theory of deception – truth-default theory. This theory holds that the content of incoming communication is typically and uncritically accepted as true, and most of the time, this is good. Truth-default allows humans to function socially. Further, because most deception is enacted by a few prolific liars, the so called “truth-bias” is not really a bias after all. Passive belief makes us right most of the time, but the catch is that it also makes us vulnerable to occasional deceit.

Levine’s research on lie detection and truth-bias has produced many provocative new findings over the years. He has uncovered what makes some people more believable than others and has discovered several ways to improve lie-detection accuracy. In Duped, Levine details where these ideas came from, how they were tested, and how the findings combine to produce a coherent new understanding of human deception and deception detection.

Who You Are: The Science of Connectedness

Mistakes Were Made (But Not by Me)