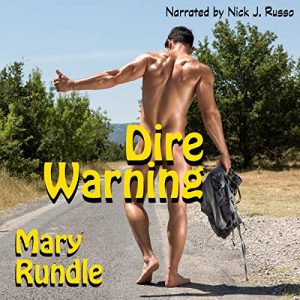 Follow the journey of the Blackwood Pack, seven brothers who are wolf shifters in search of their fated mates – stories about love at first sight with twists and turns, angst and humor, romance and adventure. Each audiobook has two men who meet, fall in love, mate and achieve an HEA but the stories also chronicle the continuing saga of the Blackwood Pack.

Steel, one of the last Dire Wolves on earth, has searched more than 100 years for the special mate promised by the Fates. Discouraged after meeting his latest prospect, he sees a naked hitchhiker on his way home who’s everything he’d envisioned the man of his dreams would be. His wolf and body tell him he’s found his fated mate but why can’t he pick up his scent?

Robbed of his car, clothes and money, Jackson, Alpha of the Blackwood Pack, has no choice but to thumb a lift, frantic to get home to his six brothers. He’s been protecting them from a rival pack who massacred most of his family and wants to finish off the rest. When Steel rolls down his window, Jackson knows he also has found his fated mate but it would be too dangerous to claim him with his pack under attack.

After the intervention of an Oracle and a Witch, Jackson discovers why the Fates made him unique – just for Steel. Navigating the mine field this revelation brings, Jackson and Steel must figure out how to make their relationship work while dealing with forces determined to kill the Blackwood pack – and them.