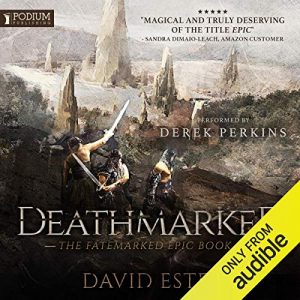 While the war for the Four Kingdoms drags on, a new threat emerges from across the sea.

To the North, Annise Gäric seek to rescue Lady Zelda and retake Castle Hill from the sellswords known as the Brotherhood. In the back of her mind is a growing fear, something she can’t quite explain. Meanwhile, Lisbeth Lorne tries to regain control of the ancient army of Sleeping Knights before they become the horde of death her soulmark has shown to her in visions.

In the West, Rhea Loren find herself at a crossroads: continue down the path of destruction or seek another way, another life. But when the truth she’s buried from her own people comes to light, she loses the control she so desperately clings to.

In the East, newly crowned King Gareth Ironclad must decide whether to pursue peace or follow in his father’s and brother’s footsteps. After all, he now has a dragon …

In Calyp, Raven Sandes is forced to fight in the pits of Zune. She wants nothing more than to give up, to die, until she discovers her sister, Whisper, is a prisoner too. What she doesn’t know is that Gwendolyn Storm is closing in on her, seeking her own vengeance for the latest attack on Ferria.

Roan Loren, on the other hand, continues to seek knowledge, clinging to the Western Oracle’s prophecy of peace. His journey takes him south to Teragon, where a truth has been hidden for more than a decade.

Grey Arris, with his new pirate allies, sails for the southern continent, but he doesn’t know what monsters lurk beneath the waters of the Burning Sea.

In the Southern empire of Phanes, Jai Jiroux and the Black Tears fight to maintain order as the newly released slaves cry for the blood of their previous masters. At the same time, he must control the slave army to defend against the Phanecians warriors to the North, who have a new leader: Bane. The kingslayer still wants peace, but he’s finally realized that he might have to destroy everything to achieve it.

The Wolf: Under the Northern Sky, Book 1