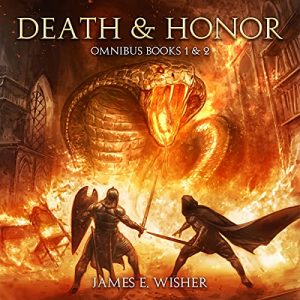 Which would you choose?

When a bandit raid destroys his home, Gabriel Kane believes his whole family is killed in the fire. Burdened by guilt, he dedicates his life to bringing those responsible to justice.

Xander Kane has a secret place, a crawlspace under the kitchen perfect for stealing snacks. When the bandits attack Xander is trapped by the flames.

Xander emerges hours later scarred and near death, his whole world reduced to ashes. Blind with rage, Xander dedicates his life to killing those responsible.

Four years pass before Xander, now an elite assassin, learns Gabriel survived the attack and is now an officer of the city watch.

Xander returns home for a reunion, but what reaction will he get from his by the law brother?

Will the two brothers be able to set aside their differences to bring down the evil responsible for their pain?

The Complete Death and Honor Duology is an action-packed, epic fantasy tale of revenge and redemption.

The Honor of Duty