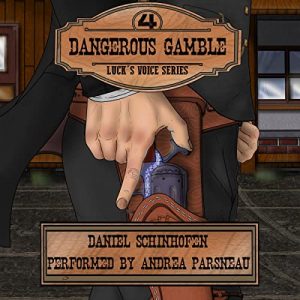 Life had gotten both better and more chaotic for Doc—he’d already been happy with Fiala and Sonya as his wives, but then Ayla and Lia joined his family. To top it off, he collared the willing dryad, Rosa. With five wives at his side, Doc had a full house of love.

He was still in the town of Deep Gulch, needing to achieve the mission Luck had given him. When Sheriff Grange killed Mayor Goodman, it removed the least of Doc’s troubles while showing that Grange was clearly a problem. Even with the Mayor out of the way, there was still plenty to take care of.

The first annual poker tournament at the Lily was coming up. The cardsharp, Mr. Suez, was one of Doc’s biggest roadblocks to freeing the town. He had a plan for him, but it would be a gamble…luckily, his patron goddess was Lady Luck.

Even if he dealt with Suez, Doc would have to handle Grange as well. The sheriff wanted him gone so he could move on Lia. On top of that, the Church of Apoc was still a threat. In Deep Gulch, that meant Adam McIan, Preacher of Apoc, would have to be removed. Doc had managed to lie to and placate the preacher, but he knew it would come to a head soon.

With all the troubles building, a dangerous gamble would have to be made. Doc knew he had allies of his own—some of the townsfolk; the Oresmelter clan in town; and, of course, his lovely and talented wives. Trusting in his goddess, Doc embarked on his plan to rid Deep Gulch of the Darkness.