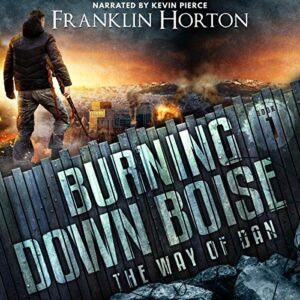 Sometimes the story of an apocalypse isn’t one of tragedy, but one of opportunity….

Dan Slaughter has given up on appearances. With his wife dead and his kids grown, he’s slowly reverting back to the east Tennessee boy he used to be three decades earlier. He quit cutting his hair and started smoking pot. He drinks when he wants to and sings along with the classic songs of his lost youth.

When his childhood friend Carl dies suddenly, Dan agrees to help Carl’s mother with the estate, even when it means traveling across the country to Boise, Idaho. Worse yet, Dan has to fly and that’s no easy task for a paranoid hillbilly not used to following rules.

Once he arrives in Boise, it doesn’t take long for Dan to figure out that there’s a lot more to his friend’s death than he’d been led to believe. He begins to suspect the overdose was actually murder and he can’t let it rest.

Only days after arriving, a mysterious solar event traps Dan in the city, leaving him with no prospect of returning home anytime soon. Rather than panicking, Dan readily accepts the new state of things. For him, the apocalypse is an opportunity. With no law enforcement, his plan to deliver a dose of Tennessee justice in downtown Boise just got a whole lot easier.