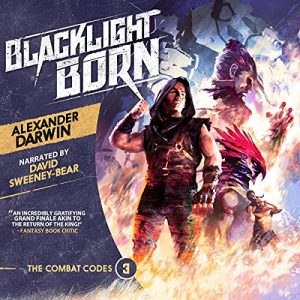 The Grievar War has engulfed the Empire of Kiroth. Silas the Slayer has given voice and violence to his warrior kin, providing them a reason to rise up after a thousand years of servitude.

Cego is released into a war-torn world where the lines between shadow and light are blurred. He must decide which side to fight for: with his brother’s righteous rebellion or beside the family he has finally found.

Murray Pearson leads a group of Lyceum students on an adventure across Kiroth to follow the path of combat mastery. But Murray seeks something more on this long road. Redemption.

Blacklight Born is the explosive conclusion to the Combat Codes Saga, a story where all must seek a final truth as they step back into the Circle. Why do we fight?

The Born to Win Seminar

House of Assassins: Saga of the Forgotten Warrior, Book 2