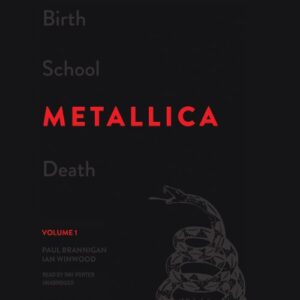 A landmark release, this is the first of a two-volume biography of Metallica, the biggest metal band of all time, told via exclusive interviews with the band and their world.

The California quartet has sold more than 100 million albums worldwide, won nine Grammy Awards, and had five consecutive albums hit number one on the US Billboard chart. Theirs is a tale about much more than sales figures and critical acclaim, though, and their journey from scuzzy Los Angeles garages to the world’s most storied stadiums has been dramatic and painful.

Birth School Metallica Death is the definitive story of the most significant rock band since Led Zeppelin. It’s a story about family, community, self-belief, and the pursuit of dreams, which unfolds through firsthand interviews with the band and those closest to it. In this epic saga, deserving of a broad canvas, the first volume details the band’s rise to international fame while the second explores the challenges and tensions that accompany such status. Piece by piece, Paul Brannigan and Ian Winwood reveal just how Metallica has stayed ahead of the competition for so many years.

How to Be a High School Superstar

The Math of Life and Death