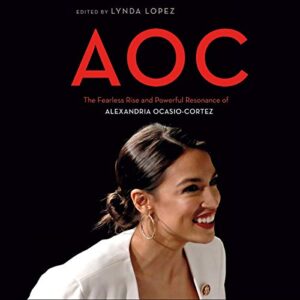 From the moment Alexandria Ocasio-Cortez beat a 10-term incumbent in the primary election for New York’s 14th on June 26, 2018, her journey to the national, if not world, stage was fast-tracked. Six months later, as the youngest congresswoman ever elected, AOC became one of a handful of Latina politicians in Washington, DC. Not yet 30, she inspires adulation; she represents her generation, the millennials, in many groundbreaking ways: proudly working-class, democratic socialist, of Puerto Rican descent, not to mention of the Bronx, feminist – and a great dancer.

At the same time, the outpouring of vitriol against her has been formidable. But with her social-media savvy and sharp wit, she fights back, creating memes and quotable lines like “Don’t hate me cause you ain’t me”. She goes viral whenever she takes the floor, inspiring young progressives and frustrating conservatives.

Lynda Lopez’s AOC investigates the many meanings of this remarkable young woman. Contributors span a wide range of voices and ages, from media to the arts and politics. Published on the one-year anniversary of her leap to power, this audiobook will be a must-have item for her many fans.

The Poems of Sappho