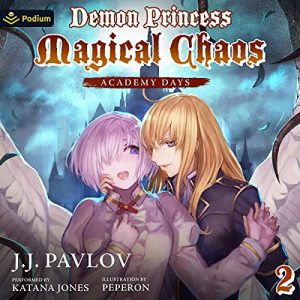 Kuroe Makoto, now known as Chaos to demons and Chloe Marcott to humans, never thought that in a fantasy world filled with sword and sorcery, she would attend school again.

Her fake human heart beats faster when she thinks of the fact that this is a magic school, the kind she has read about in so many stories. The prospect of learning spells and meeting new and interesting people has her unexpectedly looking forward to sitting in a classroom again, even when she could be out adventuring with her party of humans.

However, with every new adventure comes new dangers, new friends, and new enemies. Her enrollment at the Royal Academy in the capital city Kongenssoevn isn’t as smooth as she would have liked, and many more surprises lie in store for her even on the very first day. Join Chaos as she attends a magic school where she makes new friends, uncovers a buried mystery, and discovers a threat that may completely change the course of her future.